Mexican is not just a staple at our house, it is a requirement. In 1983 I married a Texan. At the time, we lived in Houston, so finding quality Mexican food was not a problem. Eleven years later we moved to the Washington, DC area and finding good Mexican food became a challenge.

Growing up, my mother would occasionally fix tacos – or at least her version. She learned her taco making skills while my father was stationed in Southern California in the 50’s. Hers were tasty, but did not have the same level of spice desired by my husband. In the 80’s, in Houston, Texas, the King of Mexican food (or tex-Mex) was the fajita. And the Queen of fajitas was Ninfa Laurenzo. Ninfa was famous (and still is) for elevating this dish from lowly farm hand food to international craze.

I will save you the lengthy history lesson (if you are truly interested, I suggest you read it here: http://www.austinchronicle.com/food/2005-03-04/261130/). But, basically, the skirt steak was a piece of meat that butchers either threw away or ground up into hamburger in the 70’s. This was perfect for a recently widowed woman struggling to provide for three small children. It was cheap, it was flavorful, and it took no time at all to cook. So Ninfa began selling “tacos a la ninfa” out of her kitchen window. Soon the kitchen window became a restaurant and people lined up around the block to get in.

I arrived in Houston in 1980 as the restaurant became a chain. I actually did go to the original Ninfa’s on Navigation once, but I am not a fan of standing in a line for hours to get into a restaurant. So typically, Charles and I went to one of the satellite locations.

The idea of fajitas was fully established in the restaurant world of Houston by 1980 and, by then, virtually every Mexican restaurant had their own version. My favorite came from a restaurant near us called the Cadillac Bar and Grill. It was their fajitas that actually inspired my recipe.

Once we moved to the DC area in the 1990’s, it became incumbent upon me to reproduce the highly esteemed fajitas. So I started tinkering with various recipes until I found one that I felt closely mimicked the Cadillac Bar. It was simple, quick, and something I could easily pull together. By 1995, I had 3 small and impatient children. So simple, quick and tasty was the mode of the day. Pretty much everything was thrown into a tortilla around our house. As the fajita craze (and now: street tacos) took over the country, I have never wavered from this recipe.

(I have tried other brands, but I still like this one the best)

(This marinade can be on the salty side of life, so if you are sensitive, try the lower sodium version)

For the beef, I use either skirt steak or flank steak. I like both, but skirt steak tends to be more fatty. It is also really expensive for what it is. Butchers went from throwing it away to charging $10/pound. Amazing what a little popularity will do for you. I can usually find flank steak a little cheaper. Not to mention, I can usually find flank steak. If you don’t live in an urban area, or Texas, finding skirt steak can be a bit of a challenge. I estimate using 4-5 oz pre-cooked weight per person.

I combine the marinade ingredients together in either a gallon zip lock bag or an oblong, some what shallow pan, then I add the meat. I am going to marinade for around 20-30 minutes, turning the meat at least once so that both sides are evenly coated and marinated. 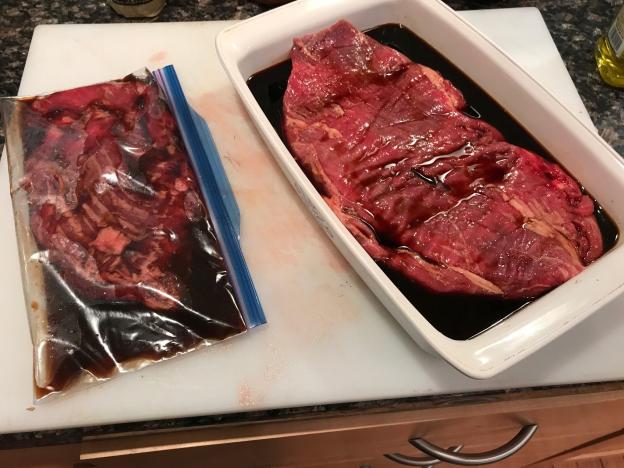 While the steak is marinating, I start the grill. I frequently use my gas grill, but if I have the time and patience, the charcoal grill tastes so much better. I like to bring my grill to 400 degrees. Getting that on the charcoal can be a task, but try to get it as close a possible. I sear on each side for 3-6 minutes. The amount of searing time will depend on the rareness you prefer and the thickness of the meat. I like mine medium rare to medium. Skirt steak is going to draw up (shrink). Don’t be concerned as this is natural.

For those of you who are never quite sure how done your steak is, try this link: https://www.youtube.com/watch?v=O8YQX-QgbXc . I learned this a few years ago at L’Academie de Cuisine, and I have taught it to all my offspring, at least the ones that would listen!

Once you have cooked your steak, let it rest! Leave it alone on the plate or pan for 5 minutes, but closer to ⅓ the time it took to cook.

Then you are going to slice it across the grain. This is critical. Skirt steak cut with the grain is practically impossible to chew.

If you are planning on using small tortillas, you may want to actually chop again.

I prefer this way, but my family prefers the strips. I don’t like having to tussle with chewy steak and, until you take that first bite, you aren’t going to know.

Now grab a tortilla, your favorite toppings, and start eating!

For a great topping idea or to have on the side, take a look at my Salsa Verde recipe!

What’re you looking for, Sugar?